Just a quick update to explain my huge absence from the blog over the past few months.

Following a painfully long and intense battle with illness, my family and I sadly lost our beloved Yaya, the most wonderful grandfather that there ever was.

I had unfortunately already been losing my baking mojo and, as my Yaya was one of my favourite cake testers, I have since been unable to take myself back into the kitchen.

However, with the new series of the Great British Bake Off, I have no excuse to get back to it, especially as his favourite cherry cake was a Mary Berry classic!!

So, in a lasting promise to my handsome Yaya, I hereby announce my sleeves rolled up and the pinny back on! 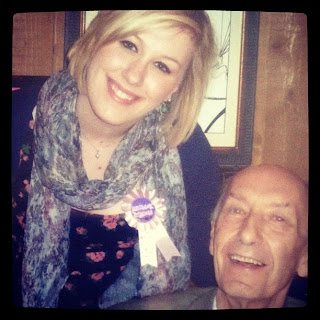 Last week was my big brother's 23rd birthday so I decided to make him his favourite cake: Coffee and Walnut! The 5th of May is a special day for our family as my parents celebrate their anniversary on the same day as my brother's birthday, so we get a double celebration! 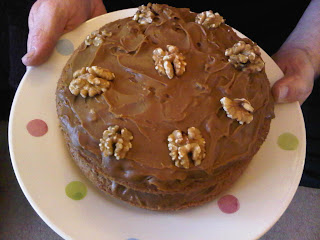 This cake is forever a favourite among the coffee lovers in our family and is truly an enjoyment to make, albeit a little bit of a lengthy process. The recipe is from the first Great British Bake Off book!﻿

Unfortunately, out of the six people who were to consume the cake, three of us hate coffee cake so I also decided to make some cupcakes. I'm a complete novice at decorating cakes and I've been desperate to get better (somebody please help me!) so I invested in Ruth Clements The Busy Girl's Guide to Cake Decorating which has clearly answered my prayers. 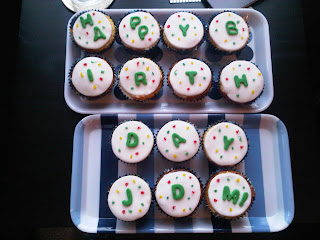 Yes, ok, they aren't a huge achievement but I have to start somewhere! I invested (I say invested because the set cost me twenty pounds...) in a Wilton cutter set for letters and numbers which I hope will be used a few more times, I have to get my money's worth!

I used the vanilla cupcake recipe from Ruth's book and was incredibly dubious as it called for four eggs, though the resulting cupcakes were very nice and fluffy. I attempted to use my initiative when decorating the cupcakes and only consulted the book for advice on how to stick the icing together, a good triumph in my eyes! I'm pleased to say both lots of birthday cake went down very well!

On a last note, my apologies for the lack of posts I've written recently, especially as the ones I have written have been mainly pictures and no recipes! It is currently the end of my first uni year so I'm finding myself low on time and my family is also going through a tough time. I will continue to attempt to blog and my thanks goes out to you all whole continue to hear my blabber on such rare occasions!
Posted by Rachael at 10:46 4 comments:

The Boy Who Bakes- Peanut Butter and Milk Chocolate Cookies

For Christmas, I received The Boy Who Bakes by Edd Kimber and what an amazing book it is! As an avid Great British Bake Off fan, I loved Edd and was excited to start baking some of his mouthwatering recipes.

The book is jam packed with impressive cakes and bakes and, even without a tempting picture, my brother and I were keen to try his Peanut Butter and Milk Chocolate Cookies. 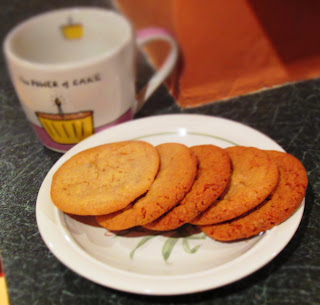 The pictures aren't great but they were eaten so quickly, we didn't really get any photos! As you can see, the cookies are a wonderful size. Although the recipe said it made twenty two, we got nearly forty five out of the dough and they were all what I would class as 'large' cookies. This made me very happy!

All in all, a wonderful cookie! They were chewy but crunchy, sweet but salty and totally moreish, I thoroughly recommend you to make these! I won't post a 'how to' as I want you to all invest in this book :)

Happy Baking everyone!
Posted by Rachael at 12:45 8 comments:

I have once again stumbled upon that time of year where I have several deadlines looming over me. My apologies for the lack of posts over the past few weeks, I'm a bit stressed and seem to spend hours over my laptop writing about David Cameron and Bridget Jones, such a peculiar combination!

As you all know, Clandestine Cake Club is massive at the moment and last month, I was lucky enough to attend my first one! The theme was 'Baking with Beverages' and my, what a creative lot we are! 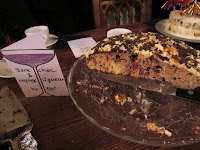 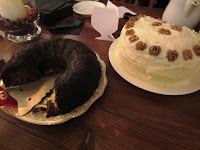 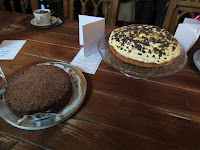 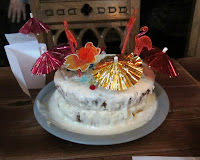 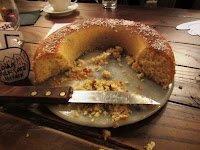 There were a lovely selection of cakes but I only managed to get a few photos as my brother and I were too busy filling our faces! I made a Pink Lemonade cake, playing on the lemon and raspberry flavours. My 'rival' cake was a Lemonade Cake and it was beautiful, it even had sugary crystals! 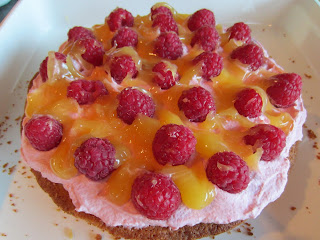 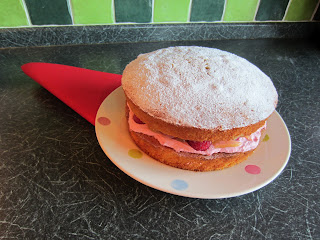 My 'Pink Lemonade' cake was a classic lemon victoria sponge, layered with raspberry creme, lemon curd and raspberries. I got some great feedback from some wonderful people and I can't wait to go back! My thinking cap is on for next month...
Posted by Rachael at 15:22 6 comments:

Where on earth have these little beauties been all of my life?! I am absolutely in love!

I've never been a lover of anything 'spicy' but, for a while now, I have been on a complete cinnamon binge. I made a large batch of cinnamon sugar for pancake day and it's been sitting brewing into something wonderful ever since. As unhealthy as it is, I'm loving this on hot, buttered toast! 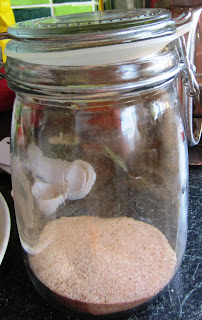 So, as the cravings continued, I decided to make Snickerdoodles! These are the most wonderful, sugary, cinnamony mouthfuls you could ever imagine. When googling snickerdoodles, The Caked Crusader came right up. As you all know, I'm a great fan of the CC and, having looked at a few recipes, decided to follow hers. I promise this obsession will stop at one point, her recipes are just brilliant to have in your files!

I get the impression that each recipe produces a different sort of snickerdoodle, some cake like, some more flat and biscuity. This recipe gave me a crunchy exterior with a wonderful cake interior! 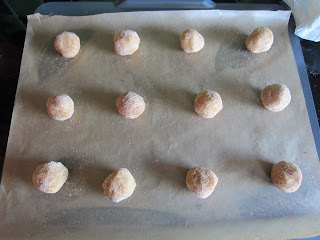 I had so much fun rolling these around in the sugar, even though my hands turned a very unattractive yellow in the process! I didn't follow the recipe exactly and used my own cinnamon sugar which I made by using a ratio of 2:1 (sugar:cinnamon) 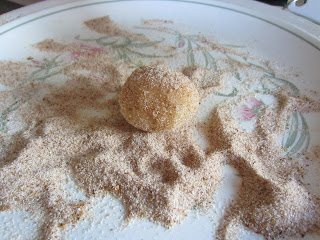 These biscuits have gone down brilliantly in my house, even the non cinnamon lovers have been converted! My favourite thing is that both my brother and my dad complained they had nothing to do with snickers, oh dear! 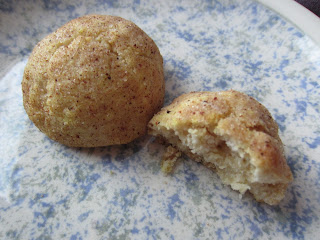 Snickerdoodles- from The Caked Crusader

For the sugar coating:

- Cream together the butter and sugar until light and fluffy. Beat in the egg and vanilla

- Stir in the flour, baking powder and nutmeg until you have a sticky but well combined dough

- On a plate, stir together the sugar and cinnamon to make the coating- this would have worked well in a bowl too!

- Taking a teaspoon of the dough at a time, roll between your palms to make a little ball. Roll the ball around on the plate with the coating and ensure it is completely covered

- Place on the baking sheet. Place a maximum of 12 biscuits per sheet as they will expand while cooking. Repeat until all the dough is used

Every time I check my blog statistics, the numbers for my original Kinder Bueno cupcakes keep going up and up. This makes me feel like a very poor blogger as they really have nothing to do with the delicious bar besides a chunk on top!

And so along came the huge and continuing urge to redeem myself and create a real Kinder Bueno cupcake! This was easy; chocolate cupcake and hazelnut buttercream. But then came the quest on how to create the 'smooth milky and hazelnut' buttercream. At first I thought I'd use hazelnut flavoured Baileys but was unable to find a miniature version. I also wanted to eliminate alcohol so Frangelico was out of the question! Then, after what seemed like hours trailing around Newcastle, the idea struck- hazelnut syrup... 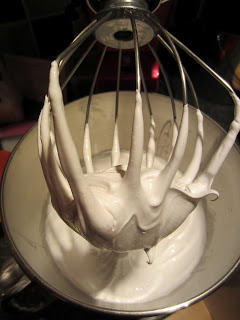 I used my favourite chocolate cupcake recipe from The Caked Crusader and also followed her step by step guide for making Swiss Meringue Buttercream which is hugely helpful even after you've made it several times! 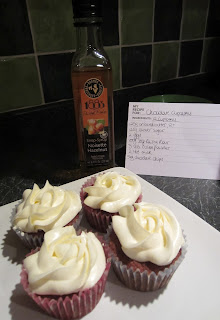 The hazelnut syrup works really well with the buttercream, and provided a really subtle flavour, just like a Kinder Bueno! I added around 2 and a half teaspoons of syrup although you could add more for a stronger flavour 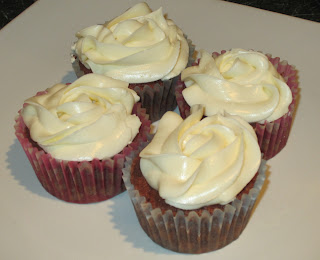 I'm really happy with these cupcakes, I feel like I've finally redeemed myself! Happy baking everyone!
Posted by Rachael at 12:55 6 comments:

It was my wonderful boyfriend's birthday last week and, having made him a bakewell tart last year, I decided to go all out this year! Football consumes every inch of our lives, whether it's being played or watched, so the theme was a no brainer... 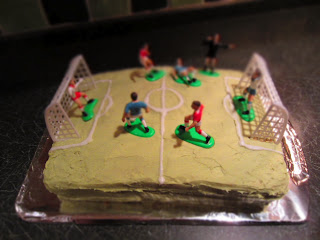 Unfortunately, none of the photos seem to justify the colour of the icing. I used nearly half a bottle but still couldn't go beyond a slightly pale shade of green! 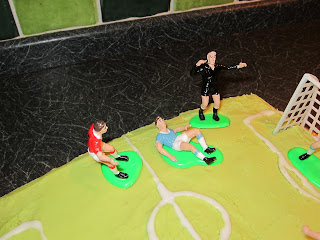 For the sponges, I doubled a bog standard victoria sponge recipe and baked them one at a time in a large tray bake pan. I planned this cake about a month before making it and obsessed every single day over whether this would be too shallow. Following several attempts, I just went for it and it was a monster of a cake!

I followed a ratio of 2:1 icing sugar to butter for my buttercream and it was delicious! The footballers were a set by Wilton that I found in Lakeland and for once, I was pleasantly surprised at how cheap they were! 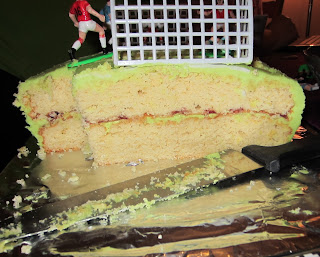 I struggled to find a cake board to accommodate such a whopper of a cake, so my dad bought me a cheap chopping board and we covered it with tin foil. It worked wonderfully!

Never again do I want to repeat my car journey with this cake on the front seat, journey of terror. All in all, a lovely cake and a very happy boyfriend! That makes me a happy Ray :)
Posted by Rachael at 19:54 1 comment: 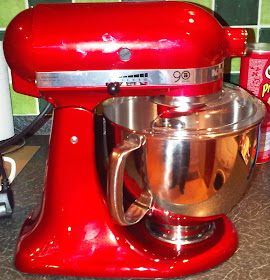 A Little Bit About Me

Rachael
I'm a student by default but a baker by choice! I have a beautiful KitchenAid named Kevin and together we will conquer all that comes at us! I may not have the perfect cupcakes, but they sure are tasty! So here I am, taking the hits and writing about it along the way!